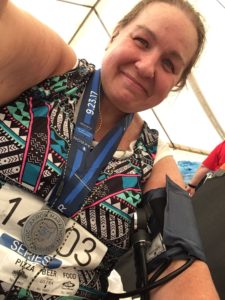 THIRTEEN
By Paula Schleis
Sept. 25, 2017, 3:30 p.m.: I’m sitting here at work, wearing an Akron Marathon half marathon medal around my neck because, well, because I have one to wear. And I have one to wear because when I didn’t have one ounce of energy left in my body, my fellow Blue Line Beginners picked me up and carried me to the finish line.

True, maybe the finish line video camera didn’t capture it. But it happened all the same. Let me explain.

I was ready to go Saturday morning, standing in the pre-dawn hours on High Street. Pain-free. Nervous but confident. Fully trusting in my six months of training.

The bell sounded, our corral moved up to the starting line, and we were off, sailing toward the Y Bridge full of hope and vigor. I was giddy with anticipation of this moment, the culmination of a summer-long adventure unlike I had ever experienced in my life. I ran just over a 15-minute mile those first 8 miles. Yeah, slow for everyone else, but by golly, that was better than most of my training runs! I was exchanging high-fives with Hero Zone kids, doing Facebook Live for my siblings, thanking spectators in lawn chairs for their home-made signs and noisy cowbells.

Then came Mile 9. The feeling came on me suddenly, like a needle piercing a balloon. I could feel my fuel tank depleting, and fast. So fast, I started to get scared. What was happening? Where was my energy going?

By Mile 10, I was done. I suppose I hit that thing they call "the wall." It’s real. I slammed into it, came to an almost complete stop, and wondered what I was supposed to do. I had nothing left to give.

I’d never felt anything like that in a training run. Not the 8-, or 9-, or 10-, or 11-, or 12-mile runs I’d done in preparation for this day. I thought maybe if I trotted a little, I’d be okay. I’ve done that before - just ignored the fatigue, pushed through, and found out there was more in the tank after all. But I could not put two running steps together.

Three miles to go. I put one foot in front of the other. I could barely walk. Was this it for me? Was there a medical tent nearby? I looked down South Main Street at the downtown skyline, trying to imagine reaching it. It might as well have been 40 miles away. There was no way I was getting there. I was toddling.

But I’ve got friends waiting for me, I said to myself. They’re at the finish line right now. I took another step.

I thought of all the hard training we’d done all year. Maybe I bit off too much attempting a half marathon, but I’d put in the work. I deserved to finish this! I took another step.

I thought of Nancy and Elizabeth, of Heidi and Denise, of Penny and Kristine, of Bob and Jeff, of Kris and Marcia, of Char and Carol, of Karen and Deanna, of Jim and Jim and Jim. I took another step.

I thought of all those downtown walks with Yu-Ling and Nina and Cindi, and I took another step.

I pictured Sandy and Amy and Lisa and our other Leg 5 runners waiting in the heat to get started. I pictured LeAnn and Marla and other Leg 3 teammates that were probably already tackling two miles of hills on the course’s most challenging segment. I took another step.

Half marathon walkers that had been behind me for 11 miles started to pass me in droves. There was nothing I could do about it. Every step was agony. Mike and Cathy passed me by. I was so happy to see them, but I couldn’t even attempt to keep up. I wished them well, then concentrated on taking my next step.

As Mile 12 approached, the SAG vehicles I’d so desperately wanted to stay ahead of finally caught up with me. They’d been generous, patient, far slower than the 16-minute pace they were supposed to be maintaining. A police officer asked if I needed a lift. I bit the side of my cheek. "Oh no, I’m great." He asked me to move to the sidewalk. I told him I would as soon as I reached a curb cut. I couldn’t possibly lift myself up onto a curb. As the vehicles moved past me, tears came to my eyes. Not because they were ahead of me. But because I didn’t accept the ride. I took another step.

At the corner of High and Selle, my nephew Dan Freeman, who worked Relay Exchange Zone 2 at Mile 12, beckoned me with a megaphone. "And here comes Paula Schleis!" I limped up to him. Told him I didn’t think I could go another mile. "Should I call someone to pick you up?" No! That’s not the proper response! When someone who has trained for 6 months tells you they can’t go on, you say "Yes! You can go on!" I’ll be fine, I told him, limping away.

I passed Exchange Street. The road now open, I waited for cars to pass. I made my way toward State Street, slowing even more as I trudged behind people who were walking to their parked cars. I thought I was the last half marathoner making the way to the stadium when three women passed me. Two of them were physically holding up the third inbetween them, tugging at her. I couldn’t even keep up with that. They disappeared around a final corner. I took another step.

On Main Street, Canal Park came into view. Fresh-faced relay runners sped past me. "You better stay to the side sweetie. Those guys will run you over," a spectator said. I nodded in agreement and hobbled to the side of the road.

I descended into Canal Park, trying to enjoy the thought of this moment. I was here. Finally here! I spotted my friend, Duane, calling my name. I was so genuinely thrilled to see him. "Hi Duane!" I called back. I came to a complete stop, waited for some finishers to glide by me, then dragged myself over to exchange high fives with him at the barrier. The finish line was still 20 feet away. "That was hard, Duane," I said, standing before him as if I were already done. "You’re almost there," he reminded me. Oh, yeah. I wasn’t done. I turned from Duane and walked to the finish line, stretching my arms out in victory, in relief.

And there they were. The friends who had gotten me to the finish line. The people who had been with me every step of those last three agonizing miles, which, I would come to find out, took me a full 1 hour and 40 minutes to walk! Loretta put a medal around my neck. "Congratulations, sis!" I was so happy, even as I lowered myself to the ground before I could fall. Above me, people were handing me fluids and cold rags. Their faces were blurry. I started to feel angry. I wanted to celebrate. I wanted to go get my pizza and talk about how everyone did. I wanted to get my race series medal and take pictures with people and watch more BLB finishers cross the line and hug them.

Carrie coaxed me into getting up so cramps wouldn’t set in. I stood for 10 seconds, then was back on my knees. The medical team I had shoed away twice came back. I let them wheel me to the medical tent. I buried my head in a wet rag and chanted to myself: "Don’t pass out. Don’t throw up. Don’t pass out."

I laid on a cot in the tent in a dreamy state, my feet straight up in the air and people doing things to me. Taking my blood pressure. Putting one of those oxygen things on my finger. Putting wet towels on my head. Coaxing me into drinking Gatorade from a straw.

"Look what I did," I said weakly, holding up the medal from my chest so they could see my condition was called for. I needed them to know it was all worthwhile. They smiled approvingly.

I heard a commotion next to me and turned my head. A dozen medics encircled a man. I saw someone holding up an IV bag. Someone else held an oxygen tube.

"Is he bad?" I asked the woman who bent over me to take my blood pressure a second time. "Yes," she said. I made the sign of the cross on my chest. They lifted the man from his cot and lowered him into a tub of ice. An ambulance team arrived with a gurney and took him away.

There were people laying all over in cots, like we’d just been pulled from some warzone. I asked the doctor if that was normal. "No," he said. "It’s definitely busier than normal."

Suddenly I felt silly laying there. Was I taking up space someone else needed? A medic helped me stand up and try to walk. I took a step, then backed up and sat down again. "You’re not ready," she said. "Keep drinking your Gatorade." Grrrr.

I could see through the sheer fabric of the tent, all the people celebrating outside. My friends were out there! And then I spotted Maureen. She walked from one side of the tent to the other trying to look inside. I looked around quickly to see if any other Blue Line Beginners were in the tent with me, then realized she was looking for me. They wouldn’t let her in, but I caught her attention across the divide and gave her a thumbs up to let her know I was okay.

Duane came, too. He peeked in. "I’m fine! Be there soon!" I shouted. Then I’d had enough. "Sign me out of here, please," I asked the medic. "I’ve got things to do." They helped me up a second time so I could test my steps. Part of me longed to return to the cot, but more of me wanted to be outside. That part of me won. I hobbled out of the tent and into the sunlight.

I stayed in the stadium for nearly an hour, celebrating with a few Blue Line Beginners who spotted me and came to where I was sitting in a chair in the shade. I kept looking at my watch. It was after 12:30 p.m. Our Relay Leg 5 teammates should be coming across the finish line in a half hour or so. I wanted so badly to cheer them in. How many times had I told them not to hurry, that we’d be waiting at the finish line for them! But I was spent, possibly more depleted than I had ever been in my life. If I didn’t leave soon, I’d never be able to drive myself home.

I told myself that other BLBers would be there to greet them. Then, begrudingly, I walked myself out of the stadium, took myself home, and fell into bed without even showering.

I don’t expect I’ll ever do a half marathon distance again. But as soon as my ankles recover, I’ll be back out there, on the trail, beside my fellow Blue Line Beginners and working toward our next goal.

These people have lit in me a spark I didn’t know existed, and the only way I can think of repaying them is to nurture that light and pass it on.

That’s why, less than 48 hours after the 2017 Akron Marathon Race Series season came to a close, I’m already excited about 2018. Bring it on (just and save me a spot on a relay team next September!)